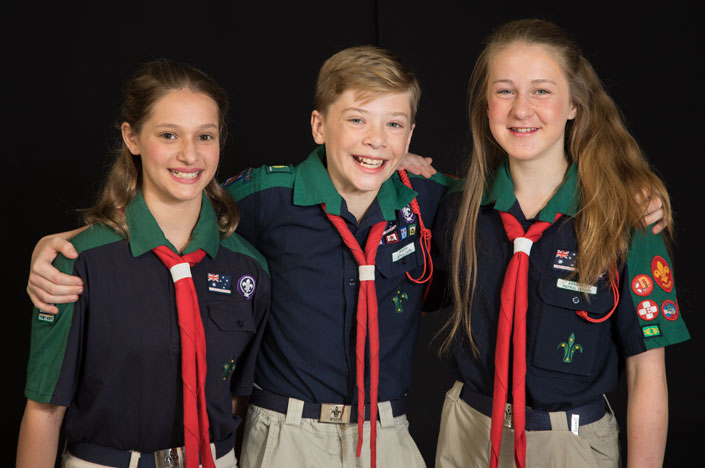 Cumberland Gang Show is a fun and rewarding training ground for theatre and performing arts in the Scout and Guide movements. Cast members gain confidence, pride, teamwork, and performance skills over the four months of rehearsals and through performing to over 4,000 people in the 8 July school holiday performances.

The Cast is open to all active members of Scouting or Guiding who are 7 years or older as at July 1st (next year).

The Comet Cast is a modified program which gives 7 & 8 year olds an exciting taste of theatre and performance - they are only required to perform in the first act of the show.


What about my other Scouting / Guiding activities?

While we encourage cast members to attend every rehearsal, we do allow them to participate in their regular Scouting and Guiding activities, without any penalty to their attendance record or Gang Show patrol points.

To join the cast, you first need to attend an audition!  The Production Team usually audition cast members on the first Saturday of December every year, for the following year's cast. Auditions are held at Baden-Powell Scout Activity Centre, Pomona Street, Pennant Hills between 9am and 5pm.

To apply, follow the ‘Audition now’ link on the home page to complete the online form (available July to Nov). Online applications close mid-November but late applications may be accepted, contact Wendy at

Auditioning, or ‘trying out’ for Gang Show is heaps of fun. Auditions help the Production Team to select the applicants who will join the cast. They also help to work out what parts you will play in the show. So, no need to worry, you don’t have to be a star to audition for Gang Show – but you will be by the time you’re finished! There’s only one thing you must have above everything else – and that’s enthusiasm! The most important thing you can do is to be enthusiastic in everything you’re asked to do in Gang Show, and never is that more so than at the Auditions!

Applicants are encouraged to apply early to secure their preferred time.

Afterwards, stay positive! Whether you think you did great, or not so great – don't worry, as long as you tried your best, you’ll be fine. Around 2 weeks after audition day, you will receive a letter letting you know whether you made it into the cast or not. Your letter will tell you what to do after that.

Rehearsals are a lot of fun - cast members play games, sing songs, learn production routines and spend time getting to know the other cast members.

Follow us on social media to get updates, exclusive deals and discounts!